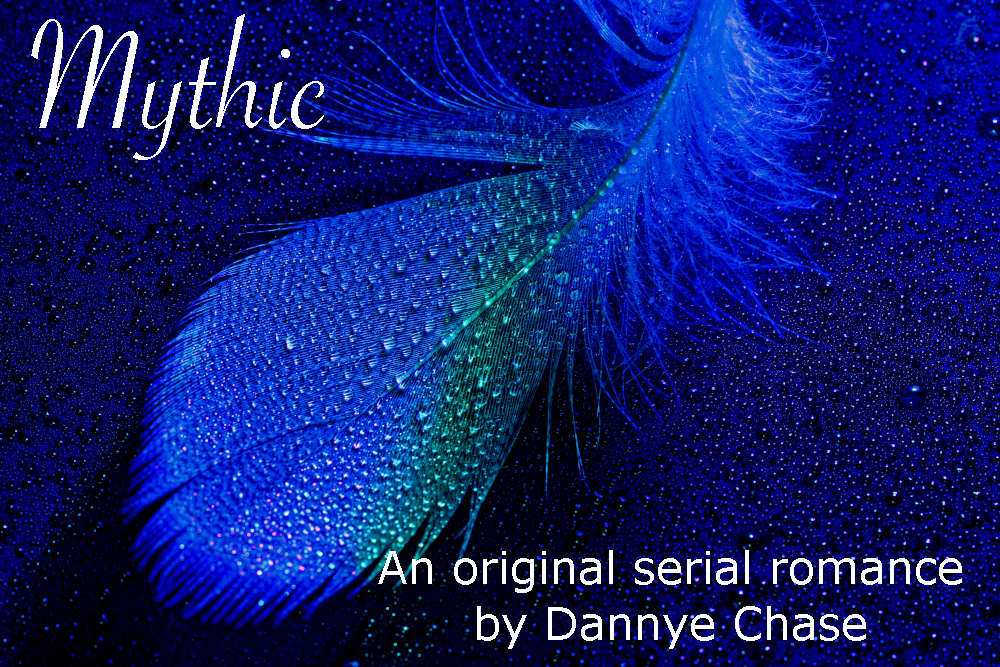 Welcome, my lovely, lovely newsletter subscribers, to the first chapter of my original serial fic Mythic! I hope you enjoy it! The fic will officially start posting on Jan 6, with a new chapter every Friday.

Despite the practical nature of Nathan’s work, the clear-cut responsibilities of a bodyguard to the queen, the concrete plans he made and followed, Nathan was a man who wished.

He never voiced his wishes, but they drifted through his mind, day after day, as he shared space with the queen’s closest attendant, Eric.

Nathan and Eric had become friendly, as their work often kept them in the same spaces, but Nathan wished them closer. He wished them love and a happily ever after, wished that when Eric was worried, he would find comfort in Nathan’s arms. Wished that when Eric showed his competence at his job, materializing from nowhere when he was needed, prepared for any situation, that Nathan could call attention to it, praise him for it.

Eric was handsome, strikingly so. Nathan wished he wasn’t.

He wished he could tell Eric how handsome he was.

At this moment, they were gathered in an office next to the queen’s bedroom. It was a quiet space with deep blue carpeting, lined with brighter stripes where the late afternoon sun came in through the windows. The furniture had probably been designed by someone famous. There were portraits on the walls that had been painted by people of immense talent. Nathan could not have described any of them, because whenever he was in this room, so was Eric.

Queen Suzanne was discussing a medical report with an advisor. Autumn was on their doorstep and everyone was worried about a resurgence of last winter’s fever, which had claimed lives in the palace and the broader kingdom. The medical advisor, Dr. Cartwright, an older man who wore bright ties, was hopeful that the population now possessed a hard-won immunity. This was very important news that Nathan needed to keep up on, but instead of following this conversation, his eyes kept being drawn to the silent man in the room.

Eric always dressed in the simple black uniform of a servant, which let him blend into the background of the palace’s cavernous spaces. The dark clothing made Eric’s brown hair seem lighter, his skin pale. He had expressive hands which kept Nathan’s attention as Eric straightened the room after lunch. His brushes against emptied dishes and salt shakers were muffled by the white gloves he wore.

At some point, Dr. Cartwright veered away from his report and began telling a mostly unrelated story. Nathan was never quite sure how the man got started on reminiscing, but his tales had more twists and turns in them than a garden path, and still usually ended up at no more important destination than a hole in the dirt. Queen Suzanne had apparently accepted the stories as part of the price of medical advice, but in her place, Nathan would have no such patience.

Nor would Eric, Nathan happened to know. As the story dragged on, Eric looked up from laying a fresh tablecloth and met Nathan’s eyes, a half-smile on his face. This was the closest Eric would ever get to disrespect toward someone of higher class, but Nathan saw it for the biting commentary it was, and he returned the smile.

Times had changed, even in Nathan’s own lifetime. Once any romance between two men would have been forbidden. It was far more accepted now, but there were still boundaries that no one could cross. Even if by some miracle, Eric shared his feelings, they could not have a home, a marriage, a life. Nathan could never have been a servant, not with his parentage. Eric could never be a bodyguard to the queen. A soldier yes, if his talents lay that way, but not an officer or royal guard. The only thing they had in common, the only way they were allowed to be together, was in serving the queen.

As Dr. Cartwright’s story drew toward its end, Nathan tensed at the sound of running footsteps in the hall. He moved to the door to intercept whoever was coming: from the sound of it, someone young and light on their feet, wearing shoes instead of military boots. A servant, then. Nathan blocked off the room as he opened the door, giving the person no line of sight to the queen.

It was Elle, one of the royal attendants who worked in the front half of the castle. Servants were often sent as messengers to the queen when people arrived, but normally they did the job with dignity. There was nothing dignified about this, Elle panting in the hallway. She crowded close to Nathan, clearly frightened. “The queen’s sister,” she said. “Sir, Lady May has been injured. There was an attack on their trip.”

Nathan very much wanted to demand more information that Elle most likely had. Instead, he drew the young woman inside, locking the door behind her. Queen Suzanne was on her feet, concern making her gaze sharp.

Suzanne was young for a monarch, only in her forties. Her dark hair showed a few silver strands, and her face had gentle creases in the places where wrinkles would later run deep. She was a quiet, pensive woman whose expressions gave away little of what she was thinking.

Nathan outranked the queen in one area only, and this was it. He put out a hand to usher her and everyone else into the inner chambers, putting another room between them and the hallway. Nathan was not one of the palace guards, so he didn’t expect to be included in their decisions. He’d have to wait to be informed of the situation when they had the chance. He glanced at his cell phone just in case, but messages of this type were prohibited from texts or calls.

“Is my sister here in the palace?” the queen asked Elle.

“How injured is she?”

“I don’t know, ma’am. I’m sorry. They just sent me running when they came in.”

Nathan knew immediately that Eric was going to offer to go get information. Technically, that was his job. But not right now. Nathan moved to block his exit from the room as Eric took the first step.

“Everyone stays here,” Nathan said severely. “Lady May’s bodyguard will give us the news as soon as—” He broke off as he saw Elle’s face go pale.

Nathan had been trained to keep his focus on his job, no matter what happened. It took effort this time, his eyes steadfast on the door while his mind whirled backwards to the age of eight, standing in the river that ran past his house, splashing Alan Jacobs with water as their toes sank into the mud.

Nathan felt a hand on his arm, warm and in the present moment. He looked up, more shocked by this than anything. This was only the second time that Eric had ever touched him.

“I’m sorry,” Eric said. His eyes, so light beneath his dark hair, were full of concern and sorrow. “I know you were friends.” He withdrew his hand, and in its absence, Nathan’s arm burned beneath his sleeve.

Nathan couldn’t thank him, he only nodded. “But everyone stays here until—” There were footsteps in the hall, a knock at the door.

“Code,” Nathan called, his hand on the gun at his hip.

The man at the door rattled off a string of numbers, and Nathan let him in. It was Paul, the head of the royal guard. He gave them the story.

The queen had sent her sister May on an informal visit to the southern part of the kingdom, where forests of giant trees met the sea. Her entourage had been ready to leave for home when the attack came. Her bodyguard, Alan Jacobs, had given his life to protect May, but she was injured. Her other guards had rushed her to the airport, getting the private plane up as quickly as they could, feeling that the safest place would be the palace. They’d let no news of it get out, afraid to tip off the attackers to the fact that May still lived.

Another attack could come at any time.

“Will she survive?” the queen asked.

Paul spread his hands. “I’m sorry, Your Majesty, I don’t know. The doctors are with her now.”

“And you’ve called up the reserve guard?”

“Yes, ma’am. They are fully deployed in the palace. So far there’s no sign of any trouble, but we’d like to ask you to please stay here until we’ve fully cleared everything.”

Queen Suzanne gestured to Eric, as Nathan knew she would. “Go. Bring me a report.”

“Yes, Your Majesty,” Eric said. As he tugged the gloves from his hands, Nathan forced himself to stand aside, clearing Eric’s way to the door. Nathan’s worries were sharp and pointed, pressing against the inside of his skin, making his hands tremble. He couldn’t follow Eric. His duty lay with the queen.

Elle and Dr. Cartwright left as well, and Nathan watched Queen Suzanne go through her own useless motions of anxiety, walking a line along the wall of her chamber, leaving faint marks on the blue carpet, twisting her hands until her fingers were white.

The queen and her sister weren’t very close. They hadn’t seen much of each other as children, but they’d occupied the palace together for two years now. Suzanne had been born first, thus she was queen. May was three years younger, and enjoyed freedoms Suzanne had rarely tasted, such as informal visits to different parts of their island kingdom.

They did care for each other, though. That was clear.

It was nearly fifteen minutes before Eric returned. Nathan recognized his footsteps, as soft as they were, and opened the door without the lockdown code.

Eric bowed his head to the queen. “Your Majesty, your sister is in good condition. The doctors believe she will live. She was stabbed in the abdomen, but it’s not terribly serious.”

“You’re welcome, ma’am. Can I get you some water?”

Eric went to the pitcher that sat on a table by the wall. But something about his movements attracted Nathan’s attention, even more sharply than usual. “Are you all right?” Nathan asked.

“You’re—” Nathan wasn’t sure how to phrase it exactly. I have your walk memorized, and you’re half a step too slow. “You seem tired,” he said, lamely, as if that was unexpected, with the hours Eric kept: awake every moment the queen was, but before and after that too, arranging her affairs, tidying her spaces.

“I’m quite well, sir,” Eric said, but his face showed a hint of a smile, as if he was warmed by the concern.

Nathan heard footsteps again and after the code had been given, opened the door to admit Paul once more. The man looked both determined and frightened, his face drawn and his shoulders sharply set. “We have an answer, Your Majesty,” he said. “But I’m not sure anyone is going to like it. The witnesses— the evidence— there were feathers found.”

“Yes, ma’am. The attack— Your sister has little memory of it. But the others— they’re saying it was the mythic people.”

There was a quick movement to Nathan’s right, and he turned to see Eric fumble an empty water glass, only just catching it before it hit the floor. Nathan was almost more shocked by Eric’s uncharacteristic mistake than the news.

“There’s no such thing as mythic people,” the queen said. “They’re stories made up to scare children.”

“But royal children especially,” Nathan pointed out. It was his job to identify threats, no matter how remote. “That’s what they say, Your Majesty, that the mythic people have attacked the royal family before.”

“There’s no such thing,” the queen repeated, but she sounded less than sure.