The Mystery of the Female Stranger

Happy Weird Wednesday! This week we are taking a look at a lady who is at once famous and unknown: The Female Stranger.

In the graveyard of St Paul’s Episcopal Church in Alexandria, Virginia, there is a grave which bears the following inscription: 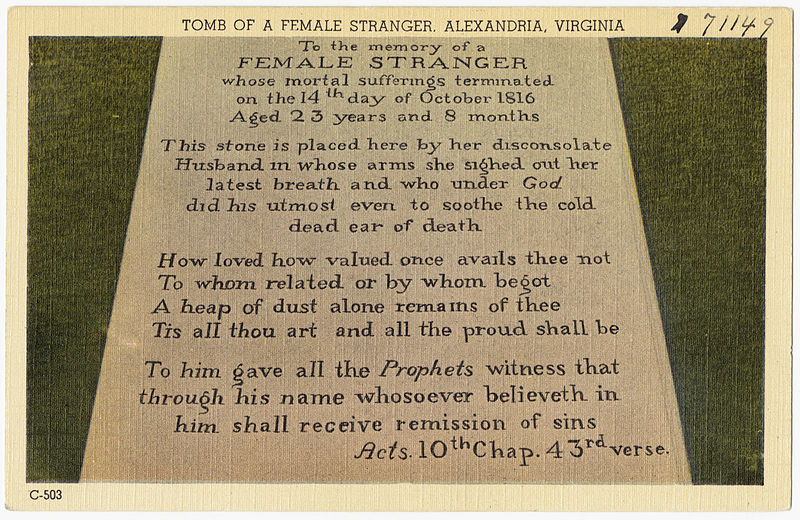 To the memory of a

This stone is placed here by her disconsolate

Husband in whose arms she sighed out her

latest breath, and who under God

did his utmost even to soothe the cold

How loved how valued once avails thee not

To whom related or by whom begot

A heap of dust alone remains of thee

Tis all thou art and all the proud shall be

To him gave all the Prophets witness that

through his name whosoever believeth in

him shall receive remission of sins

The woman and grave are real. The stories which have sprung up are most likely not. The few known facts are all in the inscription, but the basic legend goes like this: a mysterious man and woman visited Alexandria and stayed in a local hotel, said to be City Tavern, which still exists as part of a group of historic buildings. The woman was ill, or grew ill, and soon died. The husband was overcome with grief and purchased the gravestone for her, and then fled— just before everyone realized that he’d been passing counterfeit money. Local people are said to have been either left in the dark as to the couple’s true identity, or else sworn to secrecy.

Fiction writers have had a great deal of fun with this legend, and two main theories about the couple have emerged: they are either forbidden lovers, or else they are on the run from the law for less savory reasons. A third theory focuses mainly on the Female Stranger herself: could she be the famous missing woman Theodosia Burr Alston?

Theodosia was the daughter of U.S. Vice President Aaron Burr. She was married to Joseph Alston, who was governor of South Carolina. During the War of 1812, Theodosia boarded the ship Patriot in South Carolina for a trip to New York to visit her father, but the Patriot vanished with all on board. Was it shipwreck or perhaps pirates, who might be interested in kidnapping a wealthy and politically connected woman? It should be noted that the age of the Female Stranger and Theodosia do not match up, with the Stranger being quite a few years younger.

And now, some strange writing prompts!

*Forbidden lovers: there are many reasons that love can be forbidden. Issues of class and crime are common in stories: a noble person falls for a commoner or a dashing rogue. Or perhaps one of the two was already married. The families of the lovers might be feuding, or there might be another boundary between them like race, country of origin, or religion. Queer couples were and are often forbidden, so perhaps the Female Stranger and her husband fled their families and attempted to pass straight.

*Criminals: According to the legend, the husband passed counterfeit money in town. Perhaps this was not a one-time thing but a normal circumstance for the two, and they were fleeing the law. Or it could be a case of malicious prosecution or simply a mistake, and fleeing was the only way for an innocent man or woman to remain free.

*Theodosia. If the Female Stranger is the famous missing Miss Burr, then who was her husband? A pirate? A sailor from the ship with whom she escaped capture or the sinking? Where was Theodosia in the years between the ship’s disappearance and the death of the Female Stranger? Captured? Married to a pirate? Marooned? And why not ever declare herself as Theodosia? Perhaps she did end up as part of a couple of forbidden lovers after all.

*Darker theories. This tale does involve the death of a woman and the immediate flight of her husband. Perhaps it wasn’t illness that felled the lady, but murder. Did he buy the extravagant gravestone out of guilt and remorse? Murder is often for money, which the husband seemed to need if he was using counterfeit bills. But of course, if the lady died anonymously, he might not stand to inherit anything from her death, as she was not declared dead. Unless she had already been declared dead. Perhaps the couple faked their deaths and fled, and then had to remain anonymous forever after?

*Ghosts! Because of course ghosts. The ghost of the Female Stranger has been spotted in the hotel room where she died, Room 8 at City Tavern, as well as other places in Gadsby’s Tavern, like the ballroom and restaurant. She is dressed in period clothing. Interestingly, the husband has not been seen. Are the lovers then separated even beyond the grave?

Hope you’ve enjoyed spending your Weird Wednesday with us– now, don’t be a stranger!

If you like creepy legends, feel free to check out the anthology Clamour and Mischief from Clan Destine Press, which contains my story Branwen and the Three Ravens.