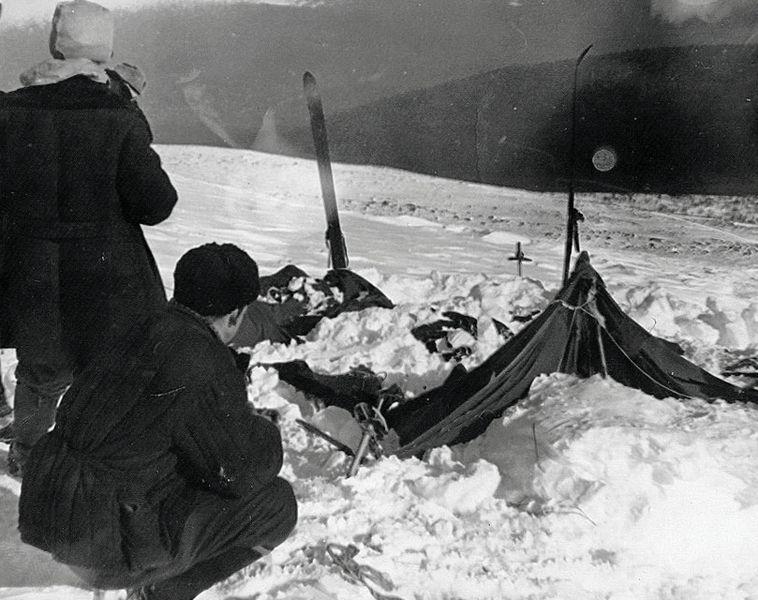 Welcome back, friends! On this Weird Wednesday we are going to take a look at the enduring enigma of the Dyatlov Pass incident.

On Feb 1, 1959, nine young Soviet hikers died on Kholat Syakhl in the Ural Mountains. They were a group of experienced skiers led by 23-year-old student Igor Dyatlov. The group missed a planned check-in by telegram on Feb 12, and on Feb 26, searchers found the hikers’ camp in a very unexpected condition. The facts are as follows:

*The tent was partly covered in snow, and had been cut open from the inside

*The group’s shoes had been left in the tent

*Footprints led down to a nearby wood, where there were the remains of a fire and two bodies dressed only in underclothes.

*A nearby tree had broken branches, suggesting it had been climbed.

*Three other bodies were found nearby.

*The last four bodies were found in the spring, lying in a stream. Some of these were wearing clothes belonging to bodies that had been found undressed. These bodies had soft tissue damage to their faces.

*Some of the bodies had severe blunt-force trauma that likely killed them, and others apparently died from hypothermia

*There were no footprints from anyone outside the group

*One of the bodies had traces of radiation

*Much later, witnesses reported that they saw mysterious lights in the sky on the night of the incident

In 2021, a study was published in the journal Communications Earth & Environment which showed that a slab avalanche was a probable explanation, and I believe this is the most likely theory. There are other somewhat plausible theories involving natural forces like katabatic winds and infrasound.

The photo at right is the tomb of the Dyatlov party at Mikhailovskoe Cemetery in Yekaterinburg, Russia. The photo at the top is of the tent as found by rescuers.

However, as usual on Weird Wednesday, we are going to use reality as a starting point for creating fiction, and there is a lot to work with here.

So here are some creepy-cold writing prompts!

*Before we even get into the wild theories, it is worth noting that the group originally had ten members. One turned back because of knee pain that made it too difficult to hike. A fictional retelling could have this person having a prophetic dream of doom or fearing that the group or hike was cursed.

*As promised: wild theories! The first is secret weapons testing or military action. The idea is that the hikers ended up in what was supposed to be an unoccupied area that was being used by the military, and became accidental victims. One of the bodies apparently showed traces of radiation and some bodies were said to be tanned, so that might be a clue to what kind of weapon was used. But really any kind of experimental weapon could work. (It is worth noting that the tanned bodies have a natural explanation: mummification via exposure can cause skin to darken.) Or perhaps the hikers saw something they should not have seen and their deaths were not accidental at all.

*Aliens! Obviously aliens are a favorite paranormal explanation for Dyatlov Pass. People reported seeing lights in the sky, and aliens could have unknown weapons that could cause disorientation, which could explain the group fleeing from their tent without their shoes. The aliens didn’t abduct anyone, so what they were up to is anyone’s guess.

*Monsters! You’ll have to ignore the fact that there were no animal footprints left, but one could create a mountain-dwelling cryptid (perhaps the Abominable Snowman) who didn’t like people camping on his mountain.

*Human drama. The real Dyatlov Pass group got along well, by all reports. But one could plot out a disagreement that grows into epic proportions in the cold, snowy night, and leads to a violent end.

*A pattern of mysterious deaths. There are at least two similar events to Dyatlov Pass. The Chivruay Pass incident took place in 1973 in the Lovozero Massif mountain range and involved the deaths of ten hikers from hypothermia. The Hamar-Daban pass incident refers to the death of six of seven members of a hiking team from hypothermia in the Hamar-Daban mountain range in 1993. This could tie into the alien theory or the monsters, or it could be some sort of curse or other paranormal bad luck. Maybe an old legend warns of hikers staying on mountains on a certain night, or perhaps a ghost wanders the area, and those who see it are doomed to be lost.

Hope you enjoyed your Weird Wednesday in the mountains! Maybe this isn’t the best place to camp, though.

If you like creepy mysteries in the snow, feel free to check out the anthology Queer Weird West Tales, which contains my story The Train Ticket: A man finds himself holding a train ticket to Hell after accidentally attempting to rob a ghost train.

The Dyatlov Pass Incident on Wikipedia

The Russian Conspiracy Theory That Won’t Die: The Atlantic